Taxpayer-funded abortions for men: It’s more possible (and evil) than you might think

By Les Riley — During the Democrat debates this past week, presidential primary candidate Julian Castro advocated for “reproductive justice for trans females” (men who live as if they are women). Though he likely misspoke and instead meant trans males (women who live as if they are men), one look at emerging technologies and the depraved state of our culture tells us abortion for biological men is much more possible, and much more insidious, than you might think.

The June 25th, 2019, Democratic Presidential Primary Debate stage was crowded to say the least. Twenty candidates stood on stage vying for attention of the audience, the Democrat base, and donors. There is no room for debate in their ranks about abortion. No Democrat candidate will go anywhere if he or she doesn’t advocate for unlimited abortion for any reason (or no reason) up to and just past birth, paid for by taxpayers, as a fundamental right for all women. But when the candidates were asked if they were pitching health care plans that provided public funding for abortion, Julian Castro, former HUD Secretary under President Obama, went a step further:

The responses from our highly politicized and ideologically divided culture were predictable. The live audience, as well as abortion and LGBTQ+ advocates on social media, expressed their appreciation for Castro taking progressivism to the next level. Reactions from pro-life, pro-family advocates were incredulous toward the lengths the culture of death has taken things. Castro’s comments are a great example of reductio ad absurdum, a logical fallacy that appeals to the extremes. Conservatives have been laughing (perhaps to keep from crying) at the absurdity of his comments for the last several days.

Aaron Colen at the Blaze gave Castro’s statement the benefit of the doubt, while also showing just how crazy the actual meaning behind his I’ll-out-progressive-you answer was: “Castro may have gotten confused on that answer, given that a transgender female is a biological male that identifies as a woman, and therefore could not get pregnant to have an abortion,” wrote Colen. It’s true that, when Castro said “trans females,” he likely meant trans males, or biological women who live as if they are men. These biological women could, of course, get pregnant and have an abortion.

However, with emerging technologies and the depraved state of our culture, abortion for biological men is a much more insidious possibility just over the horizon.

It’s been over 2 years since scientists successfully grew eight lambs in an artificial womb, as reported in the tech and culture journal, The Verge: “Inside what look like oversized Ziplock bags strewn with tubes of blood and fluid, eight fetal lambs continued to develop—much like they would have inside their mothers. Over 4 weeks, their lungs and brains grew, they sprouted wool, opened their eyes, wriggled around, and learned to swallow.” 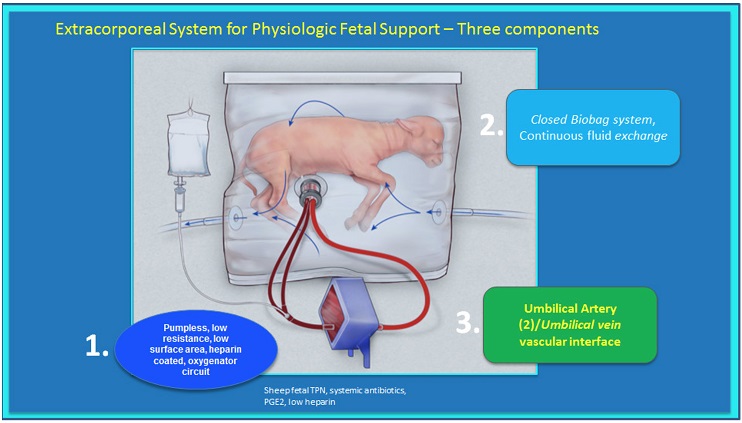 The article goes on to opine about the potential future for humans. “One day, this device could help to bring premature human babies to term outside the uterus—but right now, it has only been tested on sheep. It’s appealing to imagine a world where artificial wombs grow babies, eliminating the health risk of pregnancy,” or as Mother Jones calls it “the scary truth about childbirth.”

This was followed by a balanced caution by Dr. Alan Flake, lead author of the lamb study and a fetal surgeon at the Children’s Hospital of Philadelphia:

“It’s complete science fiction to think that you can take an embryo and get it through the early developmental process and put it on our machine without the mother being the critical element here.”

The point of developing an external womb, according to Dr. Flake, “is to give infants born months too early a more natural, uterus-like environment to continue developing in.”

This is a wise caution and a noble goal. But in a culture that is spiraling through a perpetual sexual revolution—where pre-born children are dehumanized and destroyed by the thousands every day—throwing caution to the wind and seizing this technology for a depraved agenda is a real and present threat.

Case in point: Within two months of the lambs study, British doctors and the UK media were calling for the British National Health Service to develop and fund artificial womb research for biological males. Watch this brief report on these developments.

But, isn’t it far-fetched to think that a gender-confused man would go to the trouble to get “pregnant” through an artificial womb and then exercise his reproductive freedom to kill the child? Perhaps, but for a transgender woman (biological male), the other technologies that are required are already here.

Natural sexual intercourse will never make a transgender woman (biological male) pregnant. For him, pregnancy requires exterior technology that takes genetic material from two (or more) parents to create a embryonic human and place it in the artificial womb through some manifestation of the in vitro fertilization (IVF) process. IVF has been around for decades and has been used to permit many people to have biological children. But the unintended consequences of IVF and the dark unregulated underbelly of the IVF industry gives us a clue to where Castro’s “reproductive justice” could actually take us.

To keep costs manageable and increase the likelihood of a successful birth, most IVF clinics create dozens of embryos, destroy the weakest ones, implant several into the uterus, and freeze the rest for future attempts. Leaving aside the myriad of ethical concerns here, does implanting multiple embryos mean that most mothers who participate in the IVF process give birth to triplets or quadruplets? Not thanks to a process euphemistically known as selective reduction.

A lengthy Washington Post article from over a decade ago provides great detail on the process and “ethics” of selective reduction. It’s well worth the time to read. In a nutshell, once the “fittest” embryos are implanted and reach a stage where miscarriage risk is low, the fertility specialist decides which children live, whether they are the most viable or simply escape the game of Russian roulette. The specialist then kills the others by injecting poison into their tiny hearts. The Washington Post explains:

“Selective reduction is one of the most unpleasant facts of fertility medicine, which has helped hundreds of thousands of couples have children but has also produced a sharp rise in high-risk multiple pregnancies. There is no way to know how many pregnancies achieved by fertility treatment start out as triplets or quadruplets and are quietly reduced to something more manageable. The U.S. Centers for Disease Control and Prevention, which publishes an annual report on fertility clinic outcomes, does not include selective-reduction figures because of the reluctance to report them.” 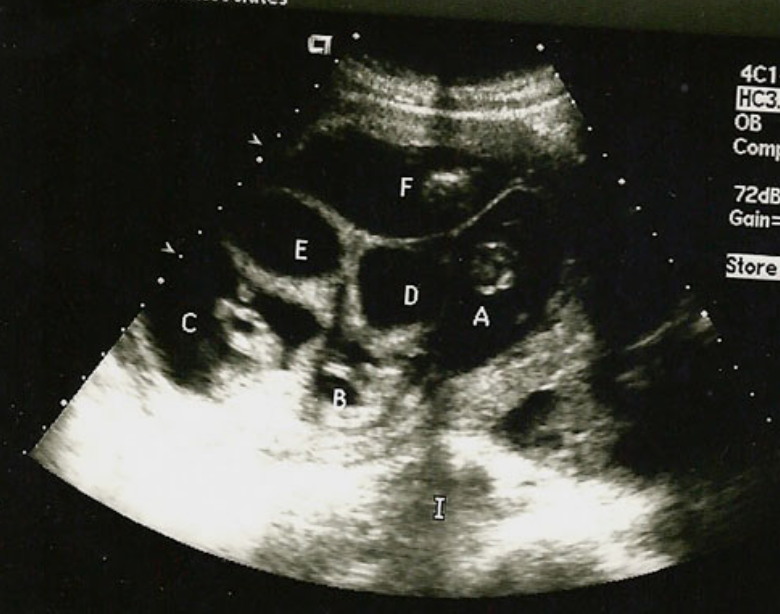 In our society, a biological male with gender confusion is encouraged to dress as a woman, think as a woman, and alter his body to become as much a biological woman as currently possible. But to have true equality and freedom and to fully experience everything a biological female can—in other words, to truly shake his fist at the Creator—transgender ideology concludes that he must be able to become pregnant and have an abortion, at taxpayer expense.

From a technology standpoint, there really is nothing to stop this from happening. There is no morally consistent, ethical barrier in the realm of emerging technologies; only opinions and consensus among morally compromised researchers. Pandora’s Box has been open for a while now, and only the depths of the twisted imagination of fallen man limit the inventions of new evil.

[They are] slanderers, haters of God, insolent, arrogant, boastful, inventors of evil, disobedient to parents, without understanding, untrustworthy, unloving, unmerciful.

So what’s the answer to this onslaught of new wickedness, called good, that seems to come at us in an unending stream?

The national pro-life movement has tried to incrementally slow the culture of death through regulations and piecemeal approaches for almost 50 years now. Ten of millions of humans have been killed while we were told that this political pragmatism was our only realistic option. One of my mentors in principled political involvement, Howard Phillips, set forth this profound view:

“Once you sacrifice the principle, you always lose the arguments on the details.”

When we give ground on the biblical principle that humans are made in the image of God and therefore, have intrinsic value, we ensure that we will always be several steps behind our Pagan culture. When we allow legal protections to apply to some humans and not others (for example, the rape-conceived, the disabled, the pain-capable, and those with detectable heartbeats measured by the very people who are about to kill them), we align ourselves with the Utilitarian strategies of the culture of death. We echo the pigs’ view in Orwell’s Animal Farm, that “all animals are equal, but some animals are more equal than others.” And we virtually assure that taxpayer-funded abortions for men will become the new normal, and who knows what after that.

Huxley’s nightmare diaspora from Brave New World is now being actively promoted as a moral good, as seen in the meme below. 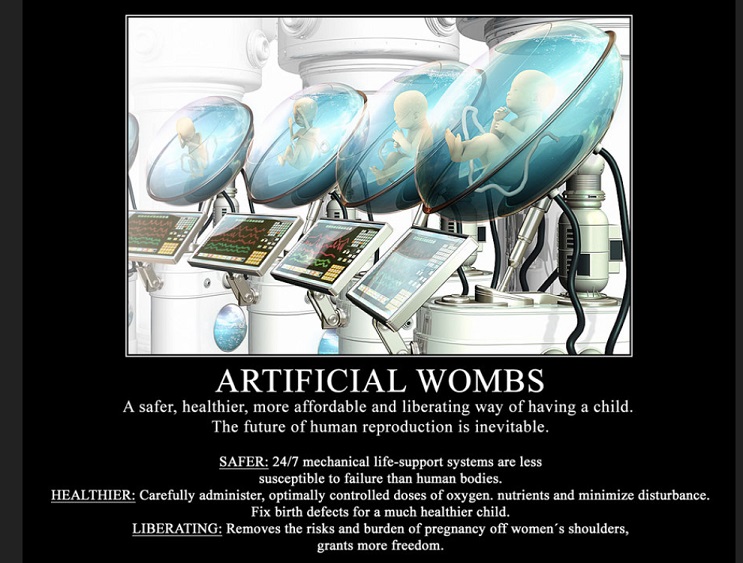 And the ethical framework that could see the 1970s science fiction movie Coma become a reality (shown below) is already being constructed, from Planned Parenthood’s trafficking in aborted fetal body parts to China’s forced organ harvesting of political prisoners. 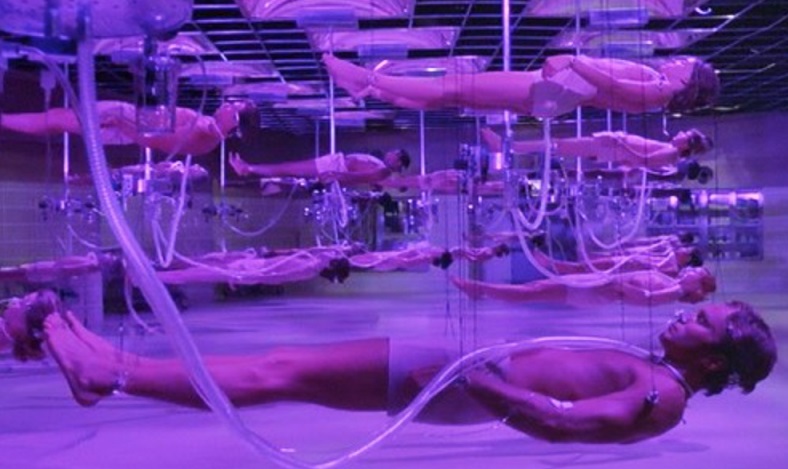 Because the sentence against an evil work is not executed speedily, therefore the heart of the sons of men is fully set in them to do evil.

“Just like an object of art—composed of color, line, texture, shape, and form—humans are designed with elements that are essential to our nature. And each of these elements is under God’s authority—life, marriage, family, sexuality, and gender. We find His perfect design in Genesis 1:27-28, also known as the Doctrine of Imago Dei (which is Latin for image of God)…Any attempt to separate, twist, or alter any of these design elements is an attempt to usurp God’s authority. This is nothing less than intentional corruption of the very nature of God’s wholistic design for the human person; the stripping away of meaning, function, and purpose.”

We must understand that the battle for life in the 21st century not only includes current threats like abortion, human trafficking, and assisted suicide and euthanasia, but also future ones emerging from advances in reproductive technology, biotechnology, and the transhumanist movement —future ones like pregnancy and abortion for biological males. All of these threats are connected. All of them target the image of God. Therefore, personhood is the only consistent answer, now and in the future.

As we work to combat the moral depravity in our culture and to speak truth into the “brave new world” of emerging technologies, I urge all followers of Christ to answer His call to live out the two great commandments:

And I invite you to join the state and local efforts of the Personhood Alliance and bring an end to the assaults on the image of God right in your own backyard.

Les Riley is president of Personhood Mississippi and vice president of the Personhood Alliance. Les has been involved in pro-life, pro-family, and Gospel-based mercy ministries in Mississippi, inner city Memphis, and Uganda, Africa for many years.