By guest author Daniel Gump — Georgia’s LIFE Act received considerable media attention during the spring of 2019, but larger discussions surrounding abortion glossed over other provisions in the legislation, including prenatal child support requirements. Prenatal child support is not new to Georgia, and surprisingly, many other states have had such laws on the books for decades. How might it impact abortion if these laws were more widely known?

Let’s look closer at Georgia’s Living Infants Fairness and Equality Act (HB 481) and its inclusion of unborn children in alimony and child support requirements of the Official Code of Georgia Annotated § 19-6-15 (a.1).  The applicable text reads:

1. As used in this chapter, the term ‘child’ means child or children, including any unborn child with a detectable human heartbeat as such terms are defined in Code Section 1-2-1.

In 1941, Nebraska became the first state with such requirements, enacting Nebraska Revised Statutes § 43-1407 with the text:

The father of a child shall also be liable for the reasonable expenses of the mother of such child during the period of her pregnancy, confinement, and recovery. Such liability shall be determined and enforced in the same manner as the liability of the father for the support of the child.

Due to the difficulty of obtaining legislative records from the 1940s, it is not clear what prompted the legislature to expand child support to cover pregnancy.*

Fifteen years later, the Michigan legislature passed The Paternity Act of 1956. This legislation assigned liability to both “the parents of a child born out of wedlock” for (a) pregnancy expenses, (b) child birth expenses, (c) the child’s support and education costs, and (d) the child’s funeral expenses. By the close of the 1950s, Florida had become the only other state to enact applicable legislation with the passage of An Act Relating to Bastardy in Senate Bill No. 119 (1959). This legislation allowed a court to order the father to pay “reasonable attorney’s fees, hospital or medical expenses, cost of confinement, and any other expenses incident to the birth of the child.”

During the 1960s, several more state legislatures enacted prenatal child support laws, but it is not clear exactly how many did so, due to the shortage of easily-accessible legislative session records. In 1962, the Mississippi Legislature passed Session Law 1962 Chapter 312, which enacted Mississippi Code § 93-9-7. This required the father to pay “reasonable expense of the mother’s pregnancy and confinement,” whether or not the infant is born alive. That same year, the New York State Assembly passed the Family Court Act, requiring the father to either assist the mother with costs of “confinement and recovery and such reasonable expenses in connection with her pregnancy” or to reimburse the State for any medical assistance provided to the mother during pregnancy.

In 1967, the North Carolina General Assembly added North Carolina General Statutes § 49-15, which held the father responsible for “medical expenses incident to the pregnancy and the birth of the child.” In either 1964 or 1972 (legislative records unclear), an amendment to Kentucky Revised Statutes 406.011 added requirements which were verbatim to those of Mississippi. The South Dakota Legislature, the Oklahoma Legislature, and the Idaho Legislature all approved legislation as early as the 1960s as well.

A turning point came in 1973, when the Uniform Law Commission — a non-partisan organization with the goal of standardizing state laws — published template legislation known as the Parentage Act.  This included the following text in §15(c):

The judgment or order may contain any other provision directed against the appropriate party to the proceeding, concerning the duty of support, the custody and guardianship of the child, visitation privileges with the child, the furnishing of bond or other security for the payment of the judgment, or any other matter in the best interest of the child. The judgment or order may direct the father to pay the reasonable expenses of the mother’s pregnancy and confinement.

The chart below tracks prenatal child support legislation in each state over time. 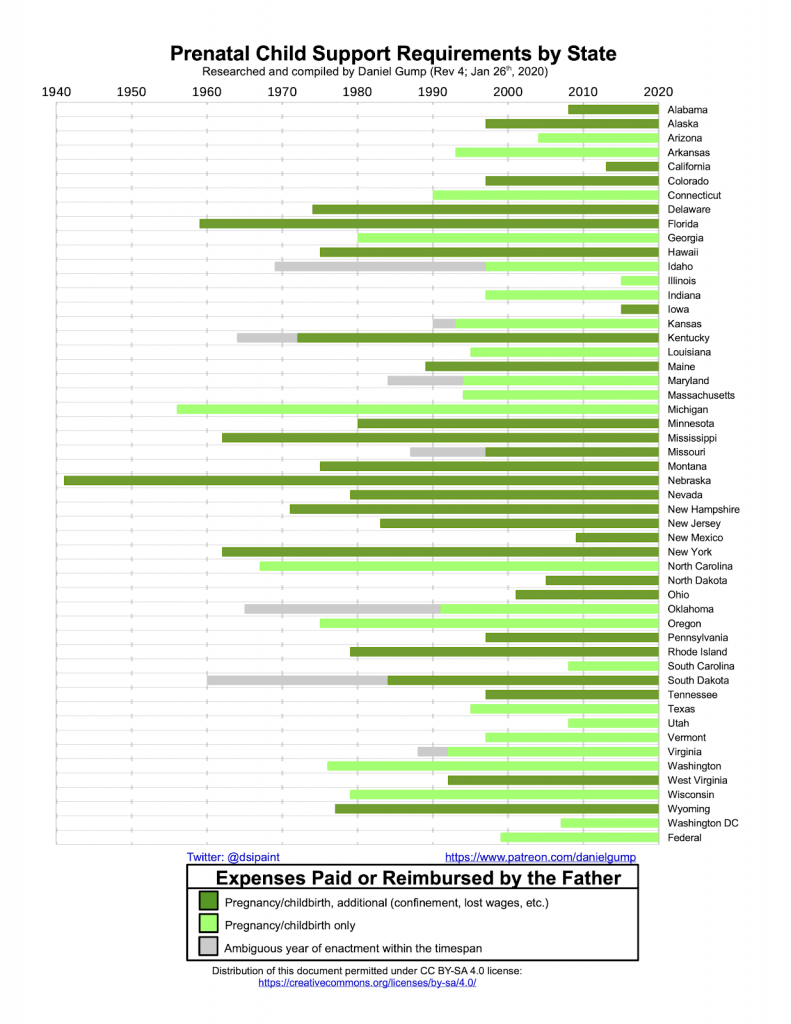 Over the next couple decades, several state legislatures used this template to either directly write laws (i.e., Hawaii, Missouri, Montana, and Rhode Island) or as a basis for laws (i.e., Maine, Minnesota, Nevada, Tennessee, and Wyoming).

Another milestone came in 1999, when the United States Congress approved 42 United States Code §666, addressing grants to states under the Social Security chapter.  This included subsection (a)(5)(K):

Procedures under which bills for pregnancy, childbirth, and genetic testing are admissible as evidence without requiring third-party foundation testimony, and shall constitute prima facie evidence of amounts incurred for such services or for testing on behalf of the child.

By 2015, every state and the District of Columbia had at least a minimum level of requirements for a father to pay or reimburse expenses relating to pregnancy and birth. Many state legislatures have also been broadening the child support requirements—including prenatal ones—over the past few decades. This is what happened in Georgia with the LIFE Act.

Previously, OCGA § 19-7-49 allowed for the presentation of “costs of pregnancy, child birth, and genetic testing” to be submitted to court for reimbursement upon determination of paternity. The amendment to OCGA § 19-6-15 specifically addresses pregnancy after divorce to impose upon the father support for “the amount of direct medical and pregnancy related expenses of the mother of the unborn child” while pregnancy is still ongoing.

The following map shows state requirements for expenses that must be paid or reimbursed by fathers. 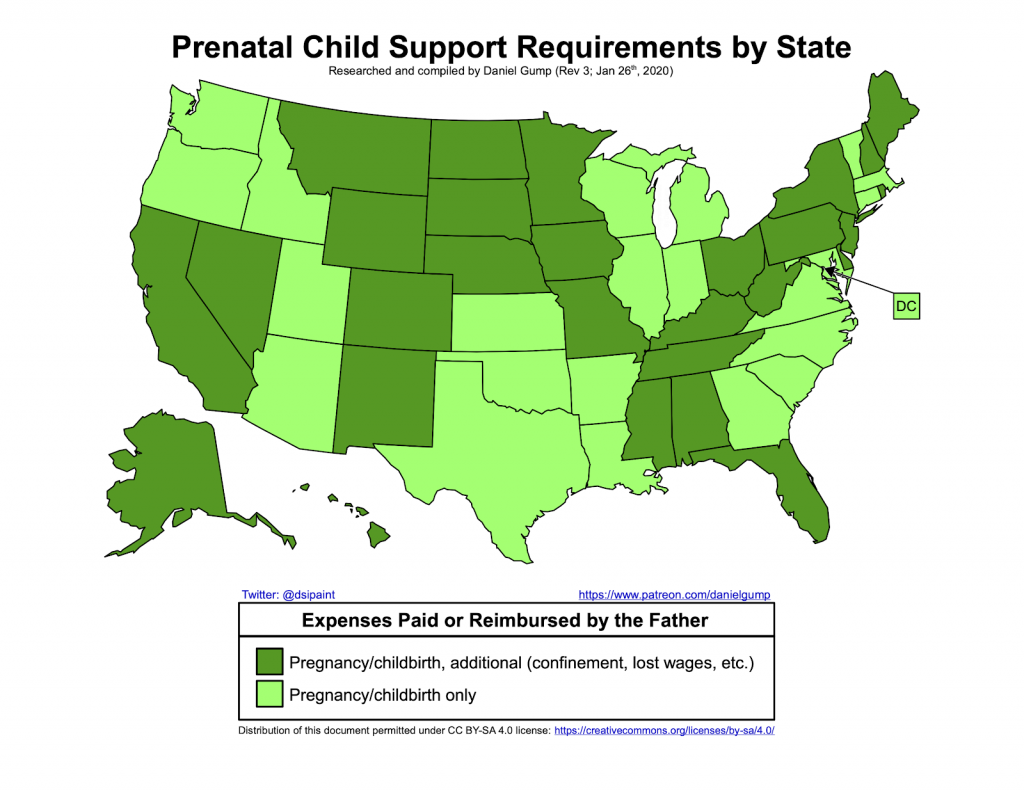 As I began research for legislation and statutes concerning prenatal child support, I expected to find either that the concept was completely new to Georgia or that only a small number of states had such requirements. The discovery of nationwide requirements surprised me. It also makes me wonder just how well-known prenatal child support laws are.

Women who find themselves abandoned by men while pregnant may not realize that they have legal recourse or financial assistance available to them. According to a 2004 Guttmacher Institute study, 73% of women have abortions because of financial insecurity.

How much reduction in abortions would there be for this specific reason if prenatal child support laws were better known?

For more information about how prenatal child support laws work in different states (e.g., how support is initiated, how much is paid by whom, and additional relevant provisions) read the addendum at the close of the article in its original publication here.

*One possible reason Nebraska implemented prenatal child support in 1941 could have been that the Army Air Corps had a large and growing presence at Offutt Field, near Belleview, during the lead-up to United States involvement in World War II. When that inevitable day would arrive, many young men would have the great possibility of being deployed, leaving behind wives and girlfriends.