By Deborah Stilt — Personhood Missouri leadership has hand-delivered over 27,000 signatures in support of Missouri’s Parental Oversight of Public Libraries Act (HB 2044). This bill, to be re-introduced in the next legislative session, gives parents the power to protect their children from age-inappropriate, sexually charged materials, concepts, and events at libraries.

Personhood Missouri president Paul Gewalt traveled to Jefferson City to present over 27,000 petition signatures in support of Missouri’s HB 2044, the Parental Oversight of Public Libraries Act. The petitions were received by Missouri House Representative Ben Baker (R), who is leading this legislative effort in his state. 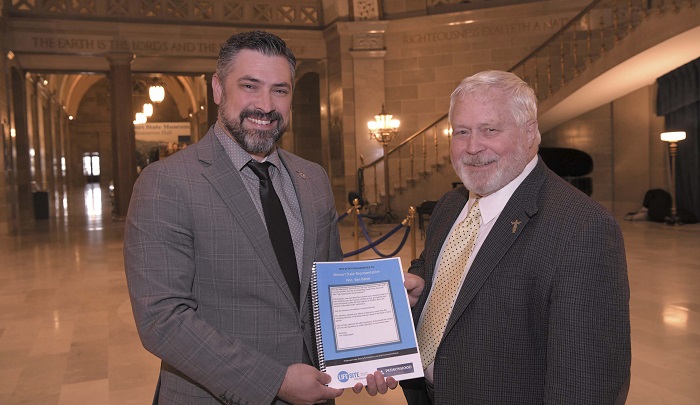 HB 2044 gives parents the power to protect their children from exposure to age-inappropriate, sexually charged, and/or sexually explicit concepts, materials, and events in public libraries, through oversight at the local level. The bill is based on model legislation developed by the Personhood Alliance, a direct action initiative that resulted from our extensive research into the American Library Association’s push to expose children to questionable concepts and experiences.

The outcry from parents and community members came particularly in response to explicit sex education classes and drag queen story hour (DQSH) events being held throughout the country and marketed to children and youth.

In a public statement on the bill, Rep. Baker commented:

“HB2044 is aimed at oversight of events like the Drag Queen Story Hours that have been happening at libraries across our country and in several libraries in our own state. It is also aimed at agenda-driven literary content designed to encourage excessive interest in sexual matters. Many parents are very concerned about such events and content, and in most cases, have no recourse but to take their children elsewhere rather than them being exposed to sexual content that is not age appropriate for their children.”

The petition was created in response to the backlash Rep. Baker received when he introduced the Parental Oversight of Public Libraries Act this past January. The bill’s opposition was “swift, strong, and full of misinformation, even death threats,” as detailed in our report here.

Opposition has primarily consisted of efforts to discredit the bill as a form of censorship and a violation of free speech and the “freedom to read.” But in reality, the bill simply creates a parental review board to offer oversight of any age-inappropriate concepts, materials, and events—allowing parents to decide whether to expose children to this type of content.

In response to the petition delivery, Mr. Gewalt reported that the signatures were well-received.

“This petition will lend much credibility to support HB 2044. The efforts of the Personhood Alliance and LifeSiteNews will not go unrecognized as this bill builds momentum in Missouri toward passage.”

Next steps in the Missouri legislature

The Missouri legislative session is set to reconvene in January, 2021, and Rep. Baker is expected to reintroduce the bill then.  In the meantime, local organizations, including Personhood Missouri and Credo of the Catholic Laity St. Louis, are working diligently to get the word out and build public support for the bill. The plan includes reaching out to Republican representatives to co-sponsor the bill, as well as presenting the bill to the Speaker of the House before the legislative session begins.

Now is the time to build momentum on this crucial legislation, not only in Missouri, but in other states across the country. If you are a legislator, staff person, volunteer, or community activist, please consider moving this legislation forward in your state. Contact us at info@personhood.org to learn more and receive the Personhood Alliance’s model legislation information packet.

Out into the community

Missouri libraries are scheduled to reopen this summer, and DQSH events are already slated to ramp back up. Personhood Missouri is prepared to peacefully protest these events and use them to educate the public about the importance of passing HB 2044.

If you have not already done so, please sign our petition with LifeSiteNews to tell Rep. Ben Baker that you support this effort. Please continue to pray for him and his family as he courageously moves this bill forward. And pray for all those who are battling daily in their communities to protect children against these attacks on their innocence.