By Tim Overlin — Hy-Vee is a popular, family-friendly chain of supermarkets based in Iowa and located throughout the Midwest. Raygun, also based in Iowa, is a clothier known for its edgy t-shirts that ridicule conservative ideas. Raygun also outwardly supports Planned Parenthood and directly funds abortions through the Iowa Abortion Access Fund. Now, Hy-Vee has partnered with Raygun to display its clothing in the kids’ department.

I personally hate the cancel culture and think boycotts have limited results. As a Christian, I’m really not sure I could survive if I avoided purchasing anything that originated from someone that offends my beliefs in some way. That being said, I think it’s time to call out a local company that seems to be universally beloved—Raygun. I know, I know. They have the cool shirts worn by celebs and other swag that seems to be everywhere. But let me present you with the rest of the story and my particular issue with Raygun, and that is this…

They directly raise money to pay for abortions, loud and proud.

I’m not talking about just raising money for “women’s health care” or whatever else they want to call it, but they specifically hold fundraisers to pay to have babies killed, through the Iowa Abortion Access Fund.

It makes me angry when I see folks wearing their clothing, especially Christians. And I feel that I need to help my fellow brothers and sisters know where their money is being spent. As I said, I’m not a big boycott guy, but directly funding abortions is different than publicly championing Planned Parenthood, which is bad enough in itself.

So imagine my disappointment when I noticed that one of my favorite local grocery chains, Hy-vee, started selling merchandise from Raygun. Not only that, but Hy-Vee placed Raygun merchandise in the kids’ department! 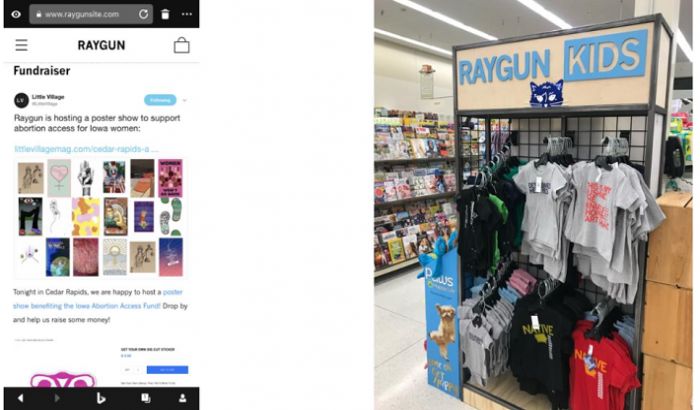 I reached out to Hy-Vee in several ways—through local managers, via their online customer service portal, and directly with the communications department—and they seem to be receptive to looking into this. However, nothing has been done as of yet.

Let’s encourage them to make the right decision. Sign Personhood Iowa’s petition with LifeSiteNews to tell Hy-Vee to stop carrying Raygun merchandise and cancel all future contracts with them. Then, share the petition with family and friends, especially those who live in the Midwest.

Tim Overlin is the executive director of Personhood Iowa, an affiliate organization of the Personhood Alliance.