Before Roe, personhood had a solid legal foundation

By Daniel Gump — The budding science of embryology and the growing underground abortion industry helped form America’s first state-level criminal abortion laws in the early 1800s. But it was the American Medical Association, an educational campaign, and the Fourteenth Amendment that helped declare the personhood of pre-born children in the laws of 21 states and mark abortion as “a crime against persons.”

The earliest known reference to criminal abortion in the United States came in 1812 with Commonwealth v. Bangs. This Massachusetts case alleged that Isaiah Bangs assaulted Lucy Holman—who was pregnant with their unborn child—and forced her to consume poison in an unsuccessful attempt to induce an abortion. The Massachusetts Supreme Court determined that Holman willingly consumed the poison, absolving Banks of liability. Additionally, since no criminal abortion laws existed anywhere in the United States at the time, the ruling was entirely based on English common law with determination that the quickening (the point at which a pregnant woman could feel fetal movement) should be the threshold for criminality. The precedent set by this case eventually served as a common demarcation between misdemeanor and felony in many early criminal abortion laws.

“Every person who shall, wilfully and maliciously, administer to, or cause to be administered to, or taken by, any person or persons, any deadly poison, or other noxious and destructive substance, with an intention him, her, or them, thereby to murder, or thereby to cause or procure the miscarriage of any woman, then being quick with child, and shall be thereof duly convicted, shall suffer imprisonment, in newgate prison, during his natural life, or for such other term as the court having cognizance of the offence, shall determine.”

This law took the precedent set by Bangs in regards to the quickening, but also equally criminalized an attempted abortion, regardless of success, with the penalty of seven to ten years imprisonment. Connecticut remained the only state with a criminal abortion law for over a decade, until Illinois enacted one in 1833, modeling much of the language on that of Connecticut and declaring the penalty for an attempt to be three years imprisonment and a fine of $1000.

The new science of embryology

Advancements in biological sciences during the late 1820s started diminishing the importance of the quickening among European academia. Karl Ernst von Baer, now known as the “father of embryology,” published his 1826 discovery of the mammalian ovum in Ovi Mammalium et Hominis Genesi (Mammalian Egg and Human Genesis). He followed in 1828 with his book on comparative embryology, Über Entwickelungsgeschichte der Thiere (About the Evolutionary History of Animals), sharing with the European medical community embryological discoveries of the ovum, blastula, and notochord. The book also described Caspar Friedrich Wolff’s new germ layer theory. During the years that followed, these discoveries also gained prominence among medical professionals in the United States.

In 1834, the Ohio legislature enacted the nation’s first ever pre-quickening criminal abortion law, alongside a post-quickening law. Both laws provided exemptions in cases where two physicians agreed that the abortion was needed to preserve the mother’s life. The pre-quickening law did not require success and declared a penalty of a year in jail and a fine of $500; the post-quickening law declared the act a high misdemeanor and provided equal punishments for the deaths of either the pre-born child or the mother with a penalty of one to seven years in prison. 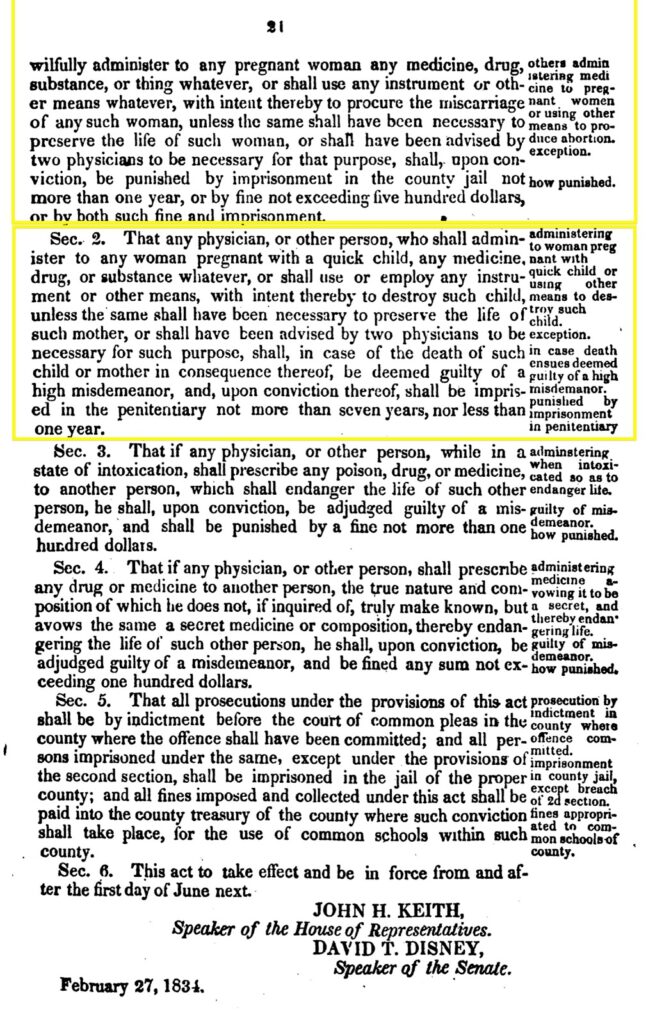 Indiana followed in 1835 with a law covering willful abortion attempts during the entirety of pregnancy (or even supposed pregnancy), regardless of success. If not performed to save the mother’s life, the penalty for such action was a year in jail and $500 fine. 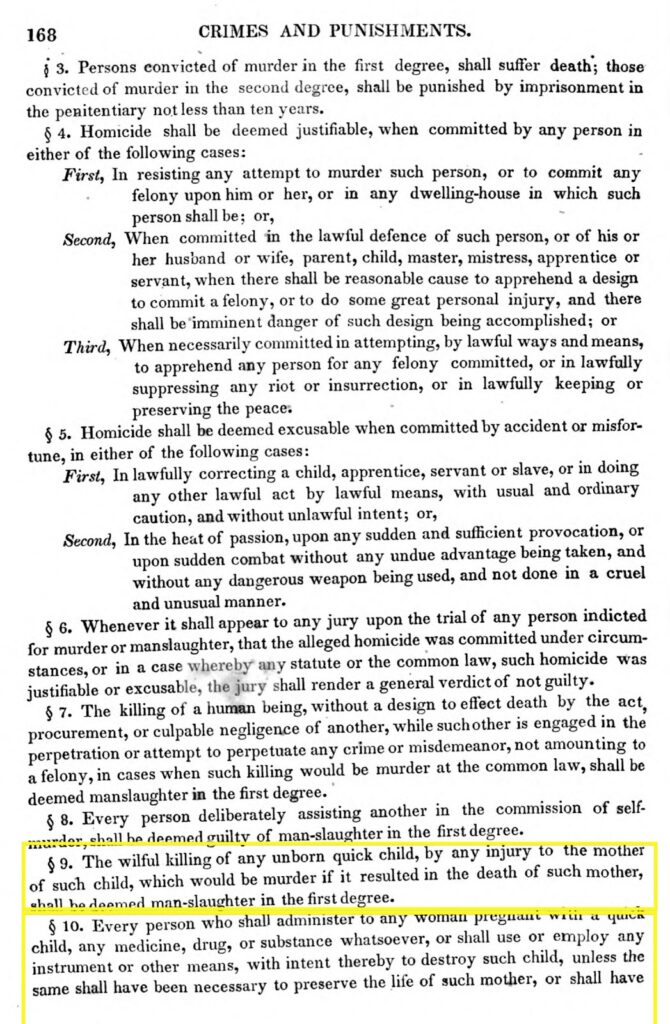 During the 1840s, several more states began ratifying their own criminal abortion laws, often taking unique approaches. In 1840, the Maine legislature enacted two separate laws applying throughout pregnancy, one regarding successful abortions with up to five years in prison and one regarding attempted abortions with up to one year in jail. Both had exceptions when preserving the mother’s life. Alabama followed the next year by taking just the attempted abortion aspect of Maine so that the jail time of three to six months would apply regardless of success at any time within pregnancy.

Massachusetts followed in 1845 with a post-quickening criminal abortion law that also applied to any parties assisting. If the mother died during the process, all involved were charged with felonies having five to twenty years in prison. Otherwise, the punishment was a misdemeanor with one to seven years in prison. Vermont adopted a similar law in 1846.

Also in 1845, New York’s legislature enacted statutes mirroring those of Missouri (and correcting the next year to require death for the manslaughter charge) alongside the nation’s first law against attempted self-induced abortions:

“Every woman who shall solicit of any person any medicine, drug, or substance or thing whatever, and shall take the same, or shall submit to any operation, or other means whatever, with intent thereby to procure a miscarriage, shall be deemed guilty of a misdemeanor, and shall, upon conviction, by punished by imprisonment in the county jail, not less than three months nor more than one year, or by a fine not exceeding one thousand dollars, or by both such fine and imprisonment.” 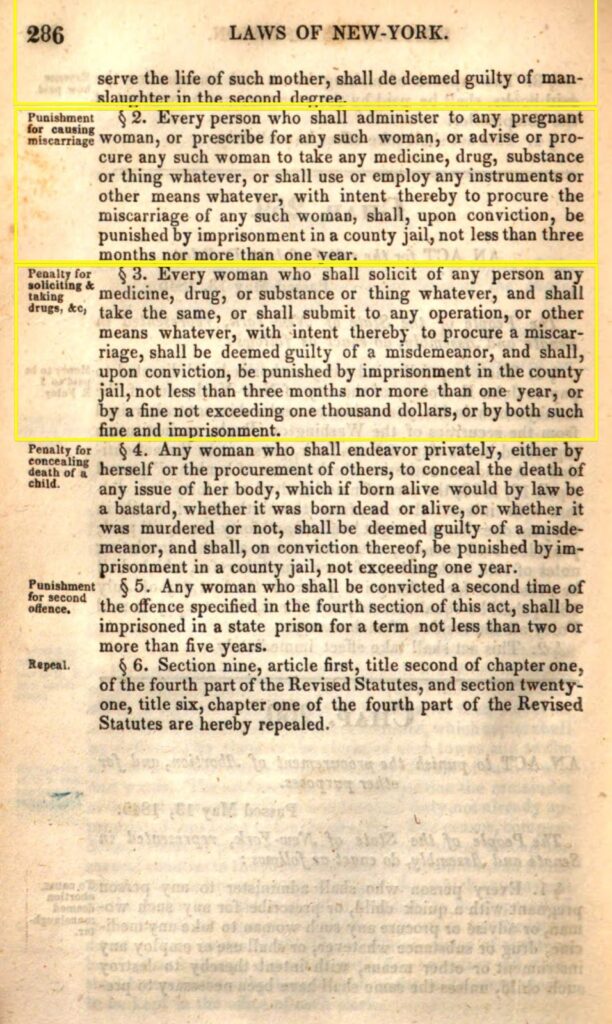 New Hampshire followed with similar laws to New York in 1848, but with a lesser sentence and the exemption requiring two physicians.

By the mid 1850s, more than half of states and territories had some form of criminal abortion laws.

In 1857 came a push by members of the American Medical Association (AMA) to assert humanity of the pre-born from conception. The Committee on Criminal Abortion met in Louisville, KY, under the leadership of Dr. Horatio Storer. In 1859, the AMA published their report, which included three statements:

The report unanimously condemned the crime of abortion and called for the following:

As a result, the AMA lobbied to close loopholes in flawed laws to slow the quickly growing underground abortion industry.

On his own, Dr. Storer was also a driving force in the civil rights push for the pre-born. He studied in-depth the underground abortion industry run by physicians and midwives of ill repute, reporting that from 1805 to 1856, the reported stillbirth rate in New York City swelled from 1:1,633.4 to 1:11. His studies led him to declare that hundreds of thousands of lives were at stake.

Storer released educational materials for OBGYNs to provide their patients  and their patients’ husbands to inform them on matters of the pre-born in hopes of reducing the abortion rates. Additionally, he released numerous essays advancing the sciences of obstetrics and gynecology to better save lives, including by advocating for the novel idea of using anesthetics during labor.

Notable among this decade was the Territory of New Mexico, which had laws in 1854 relating to post-quickening abortions and fetal homicides that declared the crimes to be third-degree murders. Additionally, in 1857, Texas’ detailed abortion act had a specific section for what would be called “partial-birth abortion” or “partial-birth infanticide” today. The penalty for this crime was five years to life imprisonment. 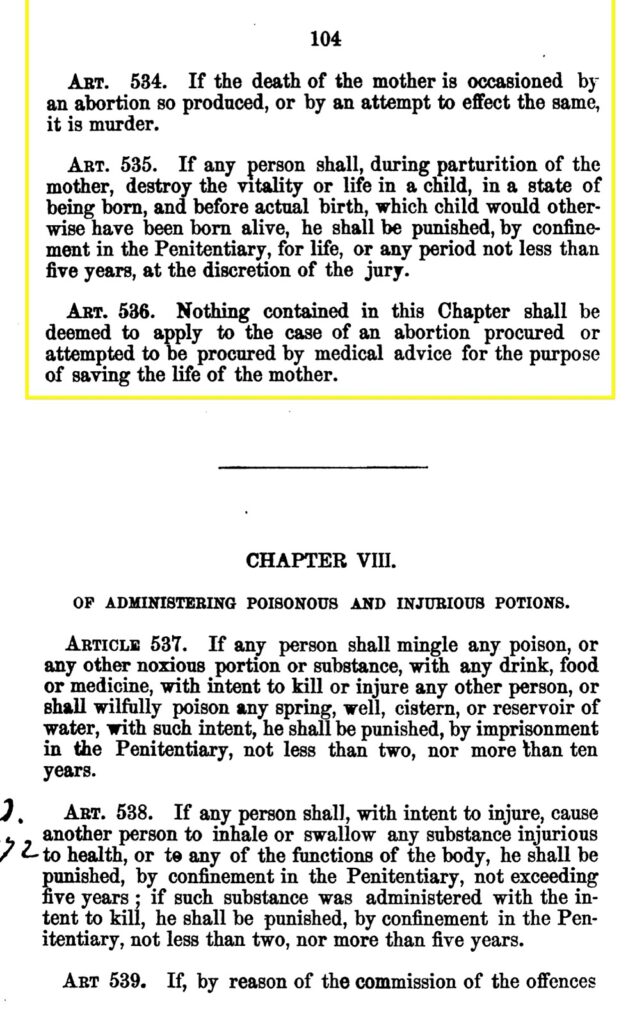 During the 1866-1868 legislative sessions, several states ratified new or amended criminal abortion laws while the Fourteenth Amendment to the U.S. Constitution was circulating among them.

The Alabama legislature passed an amended law in 1866. It applied only to successful abortions and increased the maximum penalty from six months to twelve months, possibly with hard labor. In 1868, the next legislature went on to ratify the Fourteenth Amendment.

In January of the 1867 sessions, the legislatures of Ohio and Illinois both passed joint resolutions to ratify the Fourteenth Amendment. (In March of that year, the legislature of Maryland rejected it for shifting too much power from the states to the Federal government.) Later in the same sessions, each legislature also passed abortion laws that applied throughout the entirety of pregnancies with penalties of imprisonment.

Ohio’s 1867 senate journal included a committee report on criminal abortion that referenced essays by the AMA and Dr. Storer and declared quickening was a “ridiculous distinction” and that the child in the womb was “alive from the very moment of conception.” The report’s call for increasing criminal abortion penalties on what morally amounted to “child-murder” resulted in the post-quickening penalties of the original 1834 law being expanded to cover conception onward.

Vermont’s legislature amended the state’s abortion law in 1867—the session following the state’s October 1866 ratification of the Fourteenth Amendment—with an expansion to the entirety of pregnancy and imprisonment of three to ten years for any attempted abortion, successful or not.

On June 9, 1868, the Florida legislature passed a joint resolution to ratify the Fourteenth Amendment. Two months later, the same legislature passed the state’s first abortion laws, declaring deaths of either the pre-born quick child or the mother to be the same charges of manslaughter and abortion attempts at any point in pregnancy to receive up to seven years imprisonment.

Why is the Fourteenth Amendment important?

In 1970, Steinberg v. Brown cited Griswold in defense of Ohio’s then-still-standing 1867 criminal abortion law, by concluding that personhood applies to the pre-born:

The U.S. Supreme Court also cited Griswold in Roe v. Wade (1973), using the Fourteenth Amendment and the premise of quickening as justifications for legalizing induced abortions.

Yet, it is clear that state legislatures during the Fourteenth Amendment ratification process saw the quickening as less important than decades earlier, and they were more readily asserting the legal personhood of the pre-born in criminal laws.

This emphasis of personhood was a key aspect in the Due Process Clause (mirrored from the Fifth Amendment) in the newly-ratified Fourteenth Amendment §1 (emphasis added, based on textual separation in the drafting committee journal):

In total, by 1868, twenty-one states had pre-quickening criminal abortion laws, asserting the personhood of the pre-born from the moment of conception. Additionally, twelve states declared post-quickening induced abortions (and other fetal homicides in eleven of them) to be either murders or manslaughters under crimes against the person.

The following map shows the status of criminal abortion laws by state in 1868, when the Fourteenth Amendment was ratified. 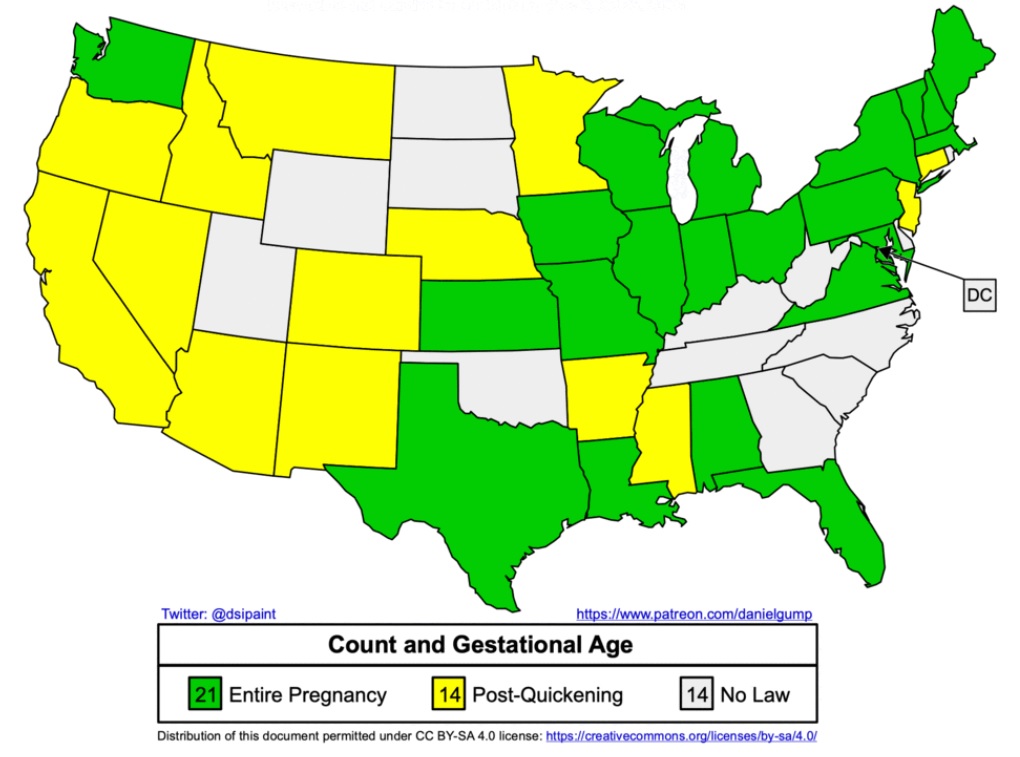 Combine these state laws with the common civil practice of posthumous inheritance, the growing commonality of prenatal child support laws, and quickly advancing medical science revealing the humanity of the pre-born, and it’s hard to deny that prenatal personhood has a solid legal foundation in America.

1 comment on “Before Roe, personhood had a solid legal foundation”