The missed opportunity of the Personhood documentary

By Daniel Gump — The documentary Personhood: Policing Pregnant Women in America had many opportunities to unite those of vastly different ideological backgrounds on flaws in the criminal justice system, disparities in treatment among different demographics, and how to better help vulnerable women during their pregnancies. Unfortunately, the film resorted to easily debunked claims, fear-mongering, and outright deception.

At the opening of the film, a block of text fades into view, paraphrasing the U.S. Constitution’s Fourteenth Amendment as guaranteeing “citizens of the United States constitutional rights and legal personhood at birth.” This interpretation disregards decades of legal precedent that afforded protections to non-citizens and the pre-born—yet it serves as the primary foundation for the entire film.

Soon after the introduction, the viewer meets Lynn Paltrow of the National Advocates for Pregnant Women. Paltrow claims that states have established fetal homicide laws as an attempt to overturn Roe v. Wade, which legalized induced abortions across the nation, upon contingency that prenatal personhood is never established. To illustrate Paltrow’s point, the documentary jumps to an animated timeline and map showing ratification of fetal homicide laws, beginning with Minnesota in 1986[1] and progressing through 2019, when it shows that thirty-eight* states have such laws. This sequence erases over a century of history, as 12 states and territories had fetal homicide laws that pre-dated the Fourteenth Amendment[2]. The crimes described in these laws were either manslaughter or murder—all defined within legal codes for “Offenses Against the Person.” Many fetal homicide laws in effect today pre-date that of Minnesota[3], and some pre-date Roe v. Wade as well (see Iowa below, in 1843). 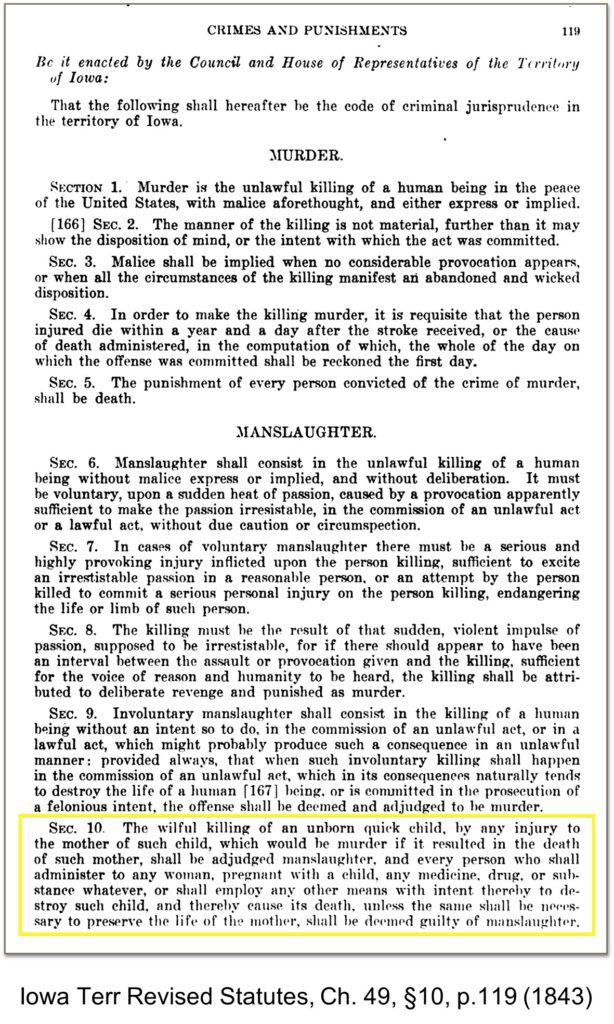 The film briefly focuses on fetal assault laws, claiming that Tennessee was the first state to enact such a law in 2014[4] and that these laws were written to “arrest pregnant people.” As they did with fetal homicide laws, the team behind this documentary neglected to research the history and purpose of such laws. Before ratification of the Fourteenth Amendment, 28 states had fetal assault laws in declaring attempted fetal homicides or attempted abortions to be crimes.[5]  In the modern era, at least 17 states had primary laws[6], and two states had secondary offense laws[7] (i.e. injury to the mother required) that pre-dated Tennessee. Nearly all of the laws now, and historically, require third-party actors, exempting pregnant women from any chance of prosecution. 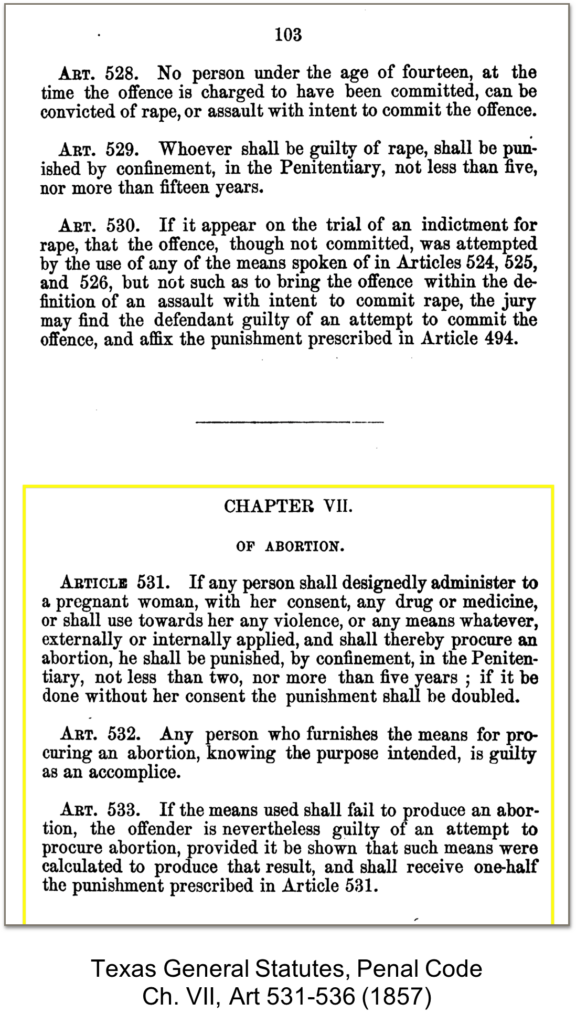 At several points, the documentary rapid-fires multiple news broadcasts and articles that claim pregnant women are being arrested en masse for miscarriages. But upon further research, one can find that the examples they provide actually relate to:

Many convictions in these cases were either vacated on the common law premise of the third-party actor (Bei Bei Shuai) or upon completion of drug rehabilitation (Mallory Loyola, Melissa Rowland). Others never even made it to court (Marshae Jones, Christine Taylor). Additionally, the documentary lumps medical malpractice (Rinat Dray) into the fray.

The reality is much different than Paltrow’s claim that “women lose their personhood” while pregnant.

A major focus of the documentary is Wisconsin’s Unborn Child Protection Act, which created and amended several sections of the Wisconsin Statutes that relate to drug and alcohol rehabilitation of parents. The changes extended the statutes to cover pregnant women and their pre-born children. The viewer is introduced to Tamara Loertscher—who narrates her own story —to portray someone victimized by this legislation. 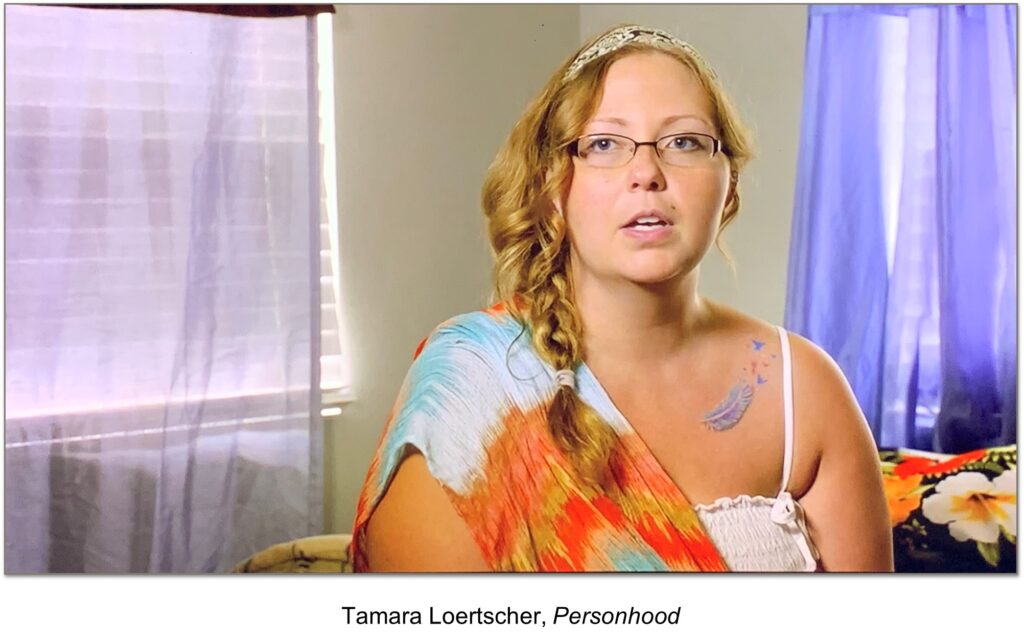 After losing her job and waiting a year to acquire Medicaid coverage, Loertscher used methamphetamines to self-medicate depression, which was brought about by a thyroid condition. When she discovered she was pregnant in August of 2014, she ceased drug use and visited a local hospital’s emergency room for a prenatal check-up. While there, she told the attending physician of the previous illegal drug use and took a drug test. Someone among the hospital staff reported her drug use to law enforcement.

The hospital staff began acting very coldly toward her, and she was not allowed see the ultrasound results until a physician later consulted with her on her “healthy baby boy” and provided sonogram images. 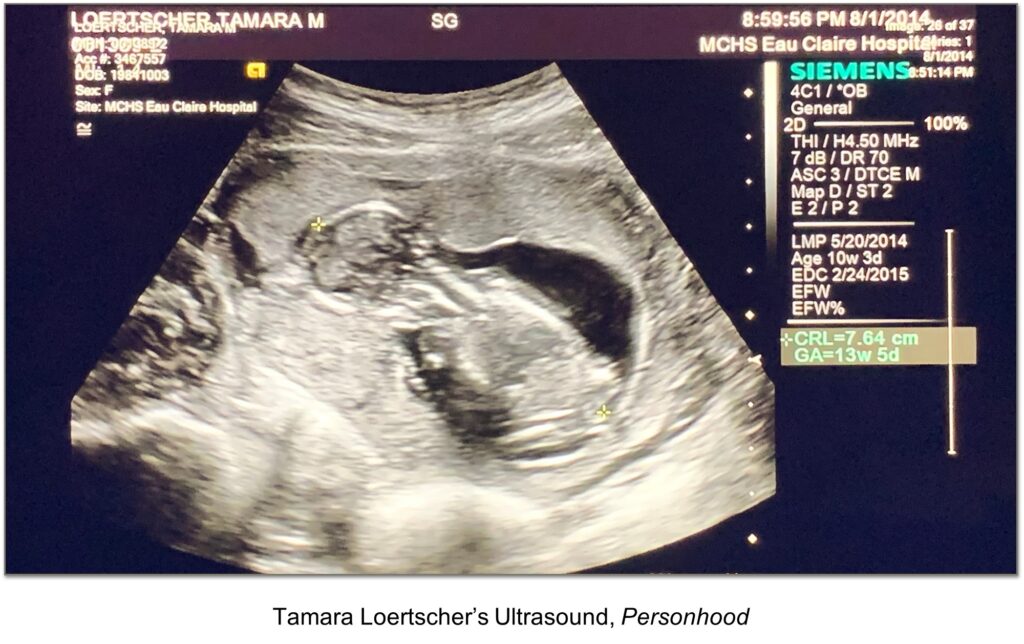 A few days later, she inquired about leaving the hospital but was denied. She tried leaving on her own and got into an argument with hospital staff. They threatened to call security or police if she did not return to her room.

She was eventually led into a conference room that had an active video feed. A judge on the screen informed her she was attending a preliminary hearing on her drug use while pregnant. During the hearing, she asked why an attorney wasn’t provider for her. When the judge stated that she didn’t need one at this preliminary hearing, she chose to storm out and run down the hall, rather than request the hearing be rescheduled once she had an attorney to represent her. By leaving the hearing, she waived the right to represent herself. Based on the evidence available (admitted drug history and inconclusive drug test results), the judge determined that Loertscher required in-patient treatment for her methamphetamine use, under Wisconsin Statutes 48.193(1)(c) and 48.193(d)(3)[8], for the duration of her pregnancy.

She responded by directly defying the order for treatment and thus, was sent to jail (by her own admission, she went to jail for contempt of court, not for drug use). During the few weeks she was in jail, she was unable to see a physician of her choice and received no prenatal care. She reported that she was mocked by prison guards and that no staff physician was available when she briefly feared an oncoming miscarriage.

She eventually called a public defender, who was able to reschedule the original hearing for her. At this hearing, she signed a decree that allowed her release from jail if she continued out-patient monitoring of drug use for the remainder of her pregnancy.

It is clear that Loertscher’s situation would have never gone beyond outpatient drug rehabilitation, if she had not decided to escalate it and then defy the court’s order for treatment.

During the Loertscher story, the documentary briefly touches on the issues of imprisonment versus rehabilitation and the high rate of incarceration in the United States, but then it returns to the hyperbolic narrative about “fertilized eggs” (the dehumanizing term repeatedly used throughout the entire film) having more rights than pregnant women. 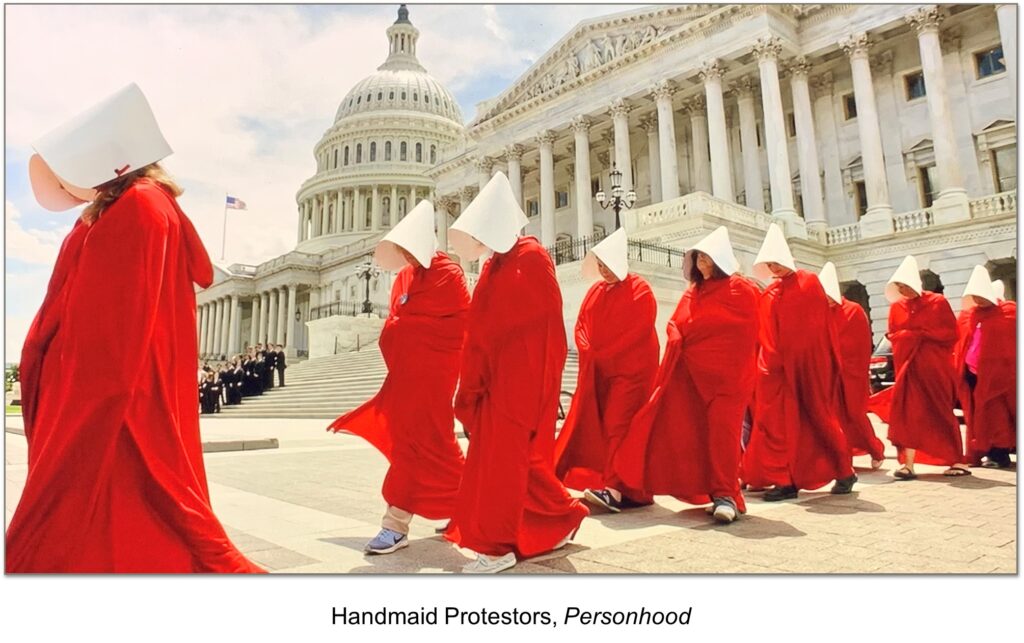 It is unfortunate that the writers chose to present the real issues as an afterthought, such as inmate healthcare and maltreatment of pregnant women who are incarcerated.

Additionally, the writers could have chosen to address Loertscher’s perceived mistreatment by hospital staff. My family has directly experienced this in relation to a stillbirth and a miscarriage. Bureaucratic hospital policies can be disheartening for patients and families, as staff members are instructed to withhold details. Loertscher’s retelling of her ultrasound experience was very similar to our own encounters, in that the technicians are often not authorized to divulge details to patients, since only an OB/GYN is considered qualified to do so. One of the worst possible experiences is watching an ultrasound technician’s face sink while struggling to find a heartbeat and being refused an explanation as to what is happening.

A major problem with this documentary is the thorough misunderstanding of the issues presented. It seems that there was little to no research conducted and that the writers simply relied on groups of like-minded abortion advocates to push a narrative. The writers chose to fight strawmen arguments based on what they think prenatal personhood advocates believe—something I call the “Don Pajote Complex” (pajote meaning a collection of straw, i.e. mulch in Spanish).

I give credit to the documentary for spending a few minutes allowing prenatal personhood advocates to speak, including former Personhood Alliance president, Gualberto Garcia Jones, Esq. Unfortunately, the film never looked any deeper at what these advocates were saying. Most segments followed with claims that personhood advocates only want to “undermine women’s rights” and “ban birth control” or that the personhood movement is rooted in “power,” “misogyny,” and “control.”

The documentary presents claims that prenatal personhood would lead to unintended consequences. The writers completely miss the fact that aspects of personhood have been well-established for pre-born children since the 1800s, including inheritance[9], child support, and (as previously mentioned) crimes against the person, like homicide or assault. It was common to find language in state laws like “[a] child conceived but not yet born is to be deemed an existing person insofar as this section is concerned”[10] (see California’s statue below). 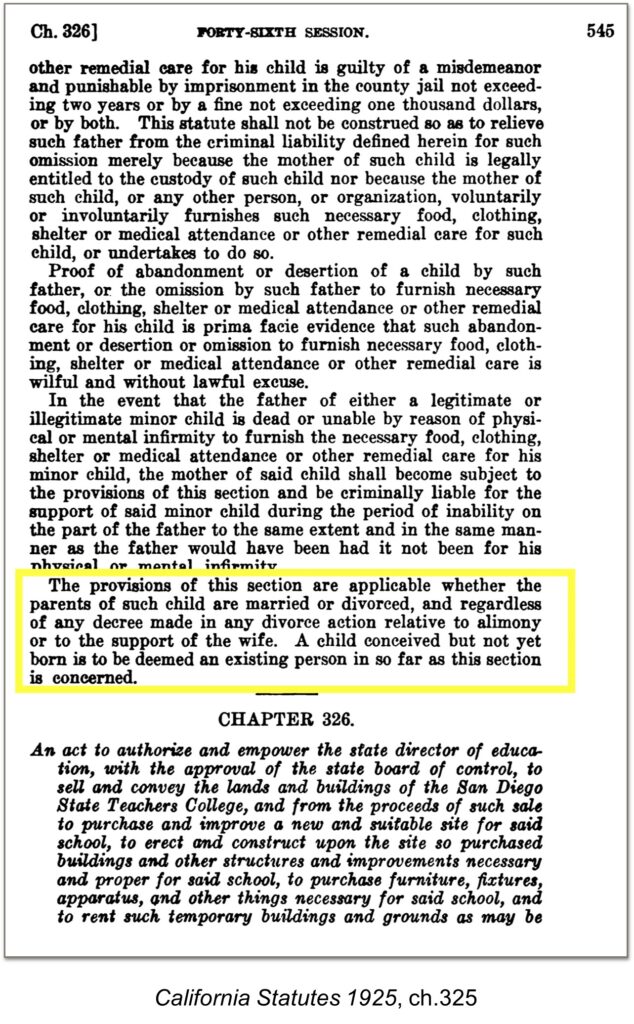 The documentary’s writers claim that, upon ratification of the Fourteenth Amendment, no states recognized prenatal personhood. This is simply untrue. On the contrary, the personhood movement was rapidly growing.

The science of embryology was only four decades old, and the American Medical Association had just discarded the premise of “quickening” (when the mother feels her baby move) a decade before the amendment’s ratification.[11] With the U.S. Civil War waging for much of the 1860s, many state legislatures were stalled leading up to the Reconstruction. Still, America saw many debates waging in state legislatures over emerging embryonic science that led many to call for better protection of pre-born children as people.

Ohio in particular had a discussion on updating the state’s criminal abortion law in 1867. A report included in the Senate Journal referred to quickening as a “ridiculous distinction” and abortions as morally equivalent to “child-murder.”[12]  This was the same Ohio legislature that ratified the Fourteenth Amendment. In fact, Florida[13], Illinois[14], Ohio[15], and Vermont[16] all updated their criminal abortion and feticide laws with the same legislatures that ratified the Fourteenth Amendment.

This was a quickly evolving time for the United States, in which the premise of personhood was under heavy reconciliation by those who had lost a fight for slavery—an institution that treated other human beings as property. It seems logical, then, that the Fourteenth Amendment—guaranteeing equal protection for all human beings—wouldn’t be written to make the same mistake of excluding an entire segment of the population.

Ultimately, the documentary Personhood: Policing Pregnant Women in America missed the opportunity to advocate for treating all human beings equally as people and focused, instead, on trying to argue that one group can be discarded at will by deceiving the viewers into believing that another group is at risk.

*This count is debatable, but they were missing Iowa[17] and several states with secondary offenses (Connecticut[18], Delaware[19], Maine[20], New Mexico[21]), sentence enhancements (Colorado[22], Oregon[23], Wyoming[24]), and those with any felonies relating to conducting post-viability induced abortions. Additionally, Hawaii and Massachusetts established post-viability fetal homicide precedent in court rulings.  The count can be anywhere from 39 to 47, excluding only New Jersey, New York (repealed in the Reproductive Healthcare Act of 2019), Vermont, and the District of Columbia.

[11] The Transactions of the American Medical Association v.XII i.0. (1859) “The Report of the Committee on Criminal Abortion,” p.75-78. Philadelphia: Collins.

Daniel Gump’s drive to directly research legislation and court decisions arose from his frustration over sensationalized media reporting on abortion. He uses his background in technical writing to interpret and summarize the source material in a way he hopes will allow others to concisely see the truth. His work can be found on patreon.com/danielgump.