Elder-neglect and the push for assisted suicide during COVID-19

By Deborah Stilt — In the wake of the COVID-19 health crisis, efforts to legalize assisted suicide have increased across America, and passive euthanasia is on the rise. Dangerous COVID-19 policies have brought thousands of deaths in long-term care facilities. What kind of message does this send our elderly, disabled, and medically vulnerable and those who care for them?

Since Oregon passed the first physician-assisted suicide law in 1997, eight more states and the District of Columbia have passed assisted suicide laws. So far in 2021, an additional 13 states have proposed new assisted suicide legislation and four states with assisted suicide laws on the books have bills ready to expand them. As if that weren’t enough, passive euthanasia—the intentional killing of a patient by withdrawing life support such as a ventilator or feeding tube —is gaining wider acceptance. And while these actions are supposedly done in accordance with the patient’s wishes, tragic stories like those of Arline Lester and Terri Schiavo illustrate that this is all too often not the case.

Hastening the death of the elderly during COVID-19

The push to hasten the death of the elderly, disabled, and medically vulnerable has been exacerbated during the COVID-19 crisis. Over the past year, the elderly have been the greatest victims of both the virus and flawed public policy, which has led to wildly disproportionate deaths in this vulnerable population—the full extent of which is still unknown. Alarmingly, people living in nursing homes and long-term care (LTC) facilities account for at least 35% of the nation’s COVID-19 deaths, despite making up less than 1% of the U.S. population. 1 in 10 nursing home residents have died of COVID-19. And as horrifying as that is, it is likely a significant undercount.

There is only one data set from the federal government on the death rates of COVID-19 in LTC facilities—the Centers for Medicaid and Medicare. Nursing homes, assisted-living facilities, and care facilities for the developmentally disabled are all eligible to report COVID deaths, but only nursing homes are required to report them. This, combined with inconsistent, non-standardized reporting by individual states leaves a gaping hole in the data. Which begs the question—WHY?

In the midst of the COVID-19 crisis, why would we fail to collect accurate data on the most vulnerable demographic of all?

The chart below shows cumulative COVID-19 deaths in LTC facilities from end of May, 2020, to end of February, 2021, based on the available data. The blue line represents data from nursing homes, assisted living, and other LTCs, as reported by the COVID Tracking Project (CTP). The orange line represents data from nursing homes only, as reported by the Centers for Medicaid and Medicare (CMS). 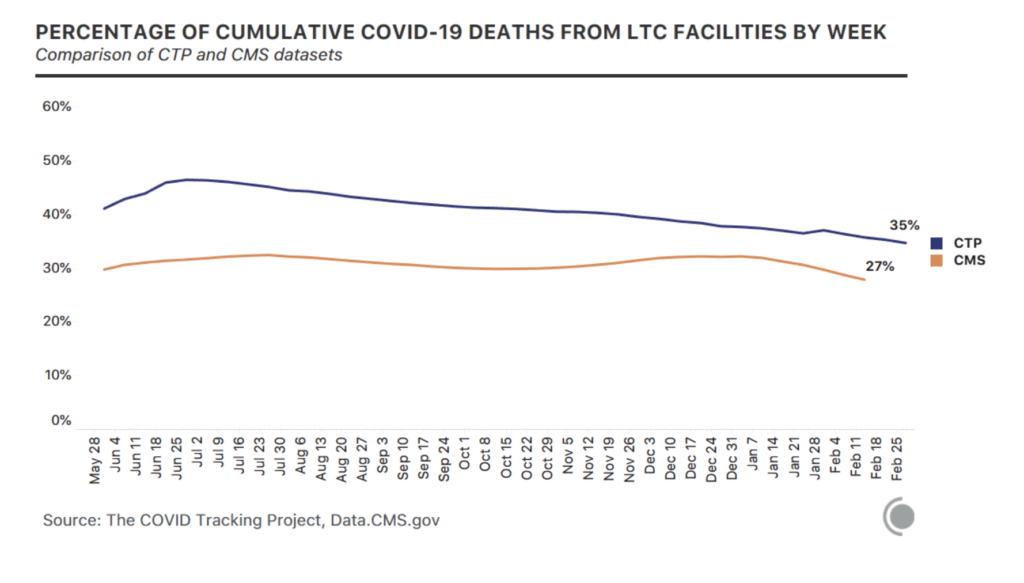 At first glance, this may appear to be a sad, yet unavoidable outcome of a virus that is particularly deadly in the elderly population. But closer analysis shows that state policies forcing nursing homes to accept COVID-19 patients into their care—in Minnesota, Michigan, and New York, for example—increased these deaths exponentially.

And sadly, no one is tracking the deaths in LTC facilities that have resulted, not from the virus itself, but from the destructive policies put in place to try to mitigate it.

For residents in LTC facilities, the resulting lockdown policies put in place to “protect” them, soon made life a living nightmare.

“I used to think they were trying to protect the elderly. But by not allowing any human contact, you are hurting them more than you are protecting them. They may not have gotten COVID, but they have a lot of other issues now that they otherwise would not have had.”

*Cindy, CNA at an LTC facility in Minnesota

Cindy, who asked to remain anonymous, describes in detail the horror of watching once vibrant, healthy people trapped inside their rooms, unable to see family for over a year. Her LTC facility, like most others, stopped all activities for residents. Meals were brought to residents’ rooms on plastic dishes. Only one meal option was given, and many residents began losing weight. All human contact was taken away – and people began to die, not from COVID-19, but from loneliness and neglect.

Cindy tears up as she recalls a healthy grandmother, making quilts in July, who was dead by late October. She had eight children who couldn’t see her until she was actively dying. Even then, only five could visit. No funeral was held due to state restrictions on social gatherings.

“It feels like they’re trying to kill off the older generation. I’ve cried with them as they cried, watching their loved ones through the window. I’ve held their hands and sung to them in their last moments, dying without their families.”

The facility’s answer has been to medicate; to drug patients who were previously healthy with anti-depressants and anti-psychotics.

And some of the medications in the dosages given are known to shorten people’s lives.

A largely overlooked component in the “aid in dying” debate, as well as the COVID-19 crisis of elder-neglect, is the mental health impact on physicians, nurses, and other healthcare providers. Being asked to facilitate another human being’s death, whether directly or indirectly, is devastating.

“I hate going to work – I feel like I’m participating in killing our elders.”

And yet Cindy, like many of her peers, will stay.

She will stay to support the residents and her fellow CNAs, as she feels she is the closest thing to family that her patients have right now. But she and many other healthcare providers are “not okay.” The strain of watching people slowly deteriorate, due to lockdown measures they are helping enforce, is taking a mental and spiritual toll.

That toll is likely to get worse if SF1352, the End of Life Options Act, passes. Introduced to the Minnesota state legislature in February, 2021, this law would allow assisted suicide with no conscience protections for individual healthcare workers. In spite of this effort, Cindy says if she were ever asked to directly participate, she “would not do it.” Under current federal law, she would be protected in that decision. But that may change in the near future.

There is an increasing push to eliminate conscience protections for healthcare providers. This is already the standard in countries such as Sweden and Finland, where physicians are barred from refusing to provide any medical care that is legal and can be fired for doing so. Proponents insist that physicians have an “obligation” to participate in “health care,” even if an act violates their deeply held religious or moral beliefs. They have no right to refuse to provide services like abortion or assisted suicide, and those who try to stand against the tide are told to find another profession.

Eliminating conscience rights for those who adhere to sound medical ethics will effectively eliminate principled health care providers. And with a healthcare system solely populated with providers who are comfortable with ending life, medical ethics will devolve even further into mere issues of legality and finances, rather than concern for human life and dignity.

Are some lives expendable?

Increasingly in today’s world, whatever sacrifice needs to be made to contribute positively to the “greater good” is considered morally acceptable—even necessary. This is because the value of an individual is seen not in his inherent worth as a person made in the image of God, but in his usefulness and ability to contribute as part of society. In this Utilitarian worldview, the life of an elderly, disabled, or medically vulnerable person holds less value than that of a young, healthy, able-bodied person. In fact, because elderly, disabled, and medically vulnerable people often use extensive medical and financial resources, the facilitation of their death is regarded as a moral good.

However, a society that encourages assisted suicide and passive euthanasia betrays human dignity and undermines the inalienable right to life of all of its citizens, creating a culture of disdain for certain groups of people. Each endorsement of suicide endangers not only the lives of persons with burdensome infirmities, but also the quality of support relationships.

According to Dr. Richard Stith,

“Once suicide becomes readily available and accepted, dependent persons who refuse to choose death will be blamed for voluntarily burdening their caregivers, and for burdening society as well, thus filling the end of their lives with new sorts of suffering.”

When assisted suicide and passive euthanasia are not an option, we are able to see those who battle against serious illness or disabling conditions as the heroes they are, struggling against an implacable fate. Their lives and their deaths are full of a meaning, ready to be discovered by them and those around them.

But once a person is given “a way out” and chooses instead to live, they will begin to gather less family compassion or community support. “By turning suicide into a right, we present those in greatest need of assistance with a choice between easy death and hard guilt,” says Dr. Stith.

Personhood must always be at the forefront of healthcare

“We hold these truths to be self-evident, that all men are created equal, that they are endowed by their Creator with certain unalienable Rights, that among these are Life, Liberty and the pursuit of Happiness.”

Preamble to the Declaration of Independence

All human beings are persons with God-given rights. We know this truth in our hearts; it is “self-evident.” Each and every human being has intrinsic dignity, worth, and value. This value does not apply only when we are useful or healthy or young. It does not depend on subjective evaluations of worth, even of self-worth, or on the ability to contribute to society.

For our legal system to be coherent and just, the law must respect human dignity by taking all reasonable steps to prevent death. Classifying a subgroup of people as legally eligible to be killed violates our nation’s commitment to equality and shows profound disrespect for God’s image-bearers.

If we ever hope to win the battle against the myriad of assaults on human life and human dignity today, we can no longer afford to compromise by allowing certain groups of people to be dehumanized and devalued—whether we’re in a public health crisis or not.