Hymn sings: Bringing the Gospel to the abortion mill and town square

By Deborah Stilt — Every Monday evening, rain or shine—or even snow—people gather in the town square of Centerville, Tennessee, to praise God by singing traditional hymns. Every Thursday, they drive an hour away to sing in front of an abortion facility in Nashville. The commitment is impressive; the impact, tremendous.

It began as a simple idea. Two years ago, Paul and Amanda Place of Personhood Tennessee decided to hold a “Hymn Sing” in front of an abortion facility in Nashville, about an hour from their home. Ten people showed up. Amanda passed out a few traditional hymns printed on plain paper, and they began to sing. They had scarcely begun when raindrops started to fall, ruining their papers, but they sang anyway. Since that day, their presence at the abortion facility has been consistent every week and has grown to an average of 30 people, representing two to three different churches.

A year after the first Hymn Sing, Paul and Amanda decided to expand their reach by singing in their hometown of Centerville as well, gathering in the town square in front of the old court house. This created a visible presence in their community, where people of all walks of life are free to stop and listen or join in.

Meeting people where they are

Today, too many people feel that the Church is no longer available to them. Hymn Sings bring God out of the building and into the community, witnessing to people where they are. It lets them know the Church is still there and can help them.

Amanda described a woman who approached her one evening as they sang. She got out of her car hesitantly, tears running down her face. Amanda walked over. The woman grabbed her hand and said, “I’m so sorry. I just need somebody to love me.” Her husband had recently left her and she needed hope and encouragement. She knew she would find it there. Four months later, the woman came back into the circle and sang with them. At the end of the song, she started praising the Lord and telling everyone how their singing was instrumental in changing her life. 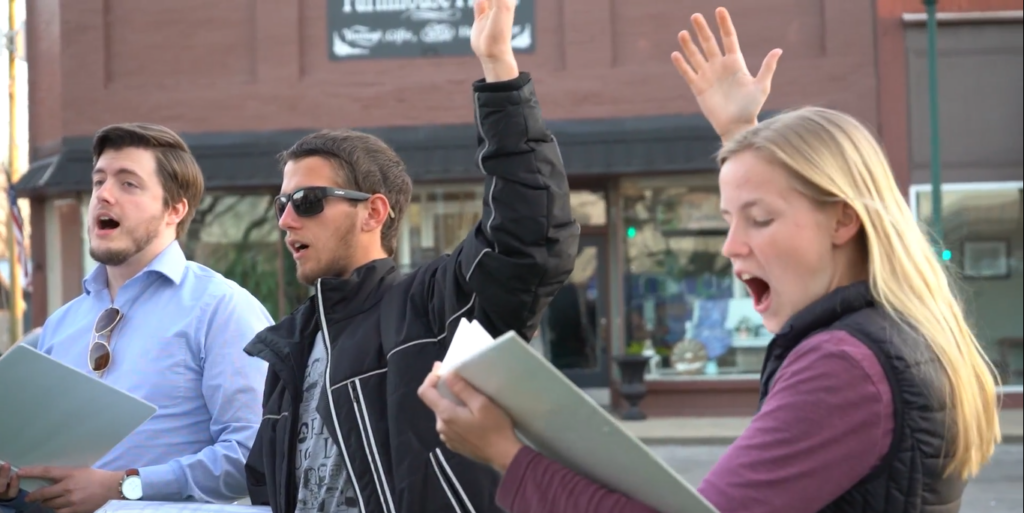 Gathering each week to praise God through song is having a profound effect on the community, creating a unifying force between the local churches. Paul described it this way:

“What strongholds of the enemy can survive in a place where people are actively praising God, literally in the town square?”

Hymn Sings are strengthening the community of Centerville and building relationships among the people, which in turn is allowing other life-affirming ministries to take root. For example, Personhood Tennessee is also engaged in Phase 1 of the Safe Cities and Counties initiative. The relationships established through the Hymn Sings over the past two years have created the perfect platform from which to launch Safe Cities and Counties, and they are well on their way to making their community Safe.

Watch this video of the Centerville Hymn Sing to see how the community has come together.

One might wonder how a group of people can commit to singing twice a week, no matter what obstacles arise. They sacrifice their time. The drive far from home. They sing in snow storms and thunderstorms. Nothing deters them. Part of what drives the group is the deep recognition that they are engaged in a spiritual battle.

As they sing in front of the local abortion facility, people often stop and listen. Some are moved to tears. Some become angry. The mere presence of Christians singing hymns often aggravates the clinic escorts who occasionally become physically agitated. The simple act of worshiping through song is a witness that pricks the conscience of these workers—and some do not come back.

At both the abortion facility and the town square, Hymn Sings are a powerful testimony of the love and faith of God. People can listen, praise God, find encouragement, and find Jesus! For Paul and Amanda, it has become a way of life. Amanda’s advice? “Sing out there, even if you’re singing by yourself.”

For more information, or if you’d like to start Hymn Sings in your own community, please reach out to Paul and Amanda Place of Personhood Tennessee at paulplace98@gmail.com.