By Deborah Stilt — Across America, thousands of pro-life Christian service members are being persecuted and purged from the military for refusing to accept an abortion-derived COVID vaccine. Even though we ask these men and women to put their lives on the line to protect our fundamental rights, including our religious freedom, our government is denying theirs. What does this mean for our military? For our nation?

A battle is underway.

The deadline has passed for military service members to receive a mandatory COVID vaccine or face disciplinary action and discharge. While exact numbers have not been released, data from the 2022 National Defense Authorization Act (NDAA) and the Department of Defense (DoD), indicate an estimated 150,000 military personnel and DoD civilian employees have refused the vaccine.

Officially, 24,000 religious exemption requests have been filed primarily by Christian service members. 99% of these claims have been denied. Meanwhile, thousands of medical and administrative exemptions have been approved. According to DoD numbers, more than 3,200 soldiers have already been discharged for refusing the vaccine, with several thousand more expected in the coming months.

So many brave men and women, who have dedicated their lives to serving our country, are giving up their livelihoods and careers instead of submitting to the COVID vaccine. What would drive a person to make such a decision? What are the ramifications of current policies to force service members out, and what are the consequences for our country?

The problem with fetal cells

Currently in the US, every COVID vaccine approved by the FDA has used aborted fetal cells in either its production, testing, or both. The term fetal cell line conjures up sterile images of lab coats and test tubes, but most people don’t look deeper to understand what this term actually means. From where exactly would one obtain fetal cells? In the case of the available COVID vaccines, two cell lines were used: HEK293, which was originally harvested from the kidney of an aborted baby girl in 1973, and PER.C6, which was obtained from the eye of a baby aborted in 1985.

Many Christians believe that to inject a substance derived from aborted fetal cells lines, regardless of how much time that has passed or whether there is any potential benefit, is to be complicit in the murder of children. Soldiers frequently state in their exemption requests that to accept an abortion-derived vaccine would violate their deeply held religious convictions. To force them to participate in a mandated COVID vaccine program is not only immoral, but also unconstitutional.

Soldiers have unalienable rights, too

What message does it send when we ask a soldier to put their life on the line to protect our fundamental rights, including our religious freedom, but then we deny them their own religious freedom?

“We hold these truths to be self-evident, that all men are created equal, that they are endowed by their Creator with certain unalienable Rights, that among these are Life, Liberty, and the pursuit of Happiness.”

– The Declaration of Independence

Our Constitution is clear on this matter. It is not our government, but our Creator that grants our rights. The carefully crafted language in our founding documents expressly prohibits the government from infringing upon or violating these pre-existing, natural, God-given rights.

Soldiers do not give up the right to freely exercise their religion when they put on the uniform. In fact, religious liberty is afforded an extra layer of protection through the bi-partisan Religious Freedom Restoration Act, which “prohibits any agency, department, or official of the United States or any State (the government) from substantially burdening a person’s exercise of religion.”

In spite of these protections, our men and women in uniform undergo an exhaustive vetting process to test the validity of their religious exemption requests—only to have the requests denied anyway.

Paul,* a decorated combat veteran and Air Force pilot, and his wife Elizabeth* are among the many families in this fight. In September of 2021, Paul submitted a Request for Religious Accommodation for the COVID vaccine. He articulately stated his case, citing his objection to the use of aborted fetal cell lines, and included a copy of his denomination’s official resolution opposing the use of abortion-derived vaccines. He also included documentation of antibodies he acquired from a COVID infection, as well as a recommendation from his military chaplain that he be granted the exemption. A portion of his claim is included below.

Despite his chaplain’s recommendation, Paul received a denial letter asserting that: “We did not believe based on our criteria that the member had a sincerely held belief regarding the vaccine and that as a result it did not substantially burden them.”

An excerpt from the denial letter follows.

Paul was given five days to appeal the decision.

In his appeal, he addressed each point of the denial in detail. He also included 21 testimonials from pastors, doctors, and others, attesting to his moral character and his unwavering stance on the sanctity of human life. His appeal was denied.

If Paul—an exemplary Christian man who has lived out his faith consistently over a period of many years—was denied his religious exemption, then it is difficult to say whose request would actually be approved.

*Names have been changed to protect identity.

For the men and women bravely taking this stand, every day has been a battle. Their moral abhorrence of abortion is questioned, mocked, and denigrated. They are labeled “unclean” and “refusers.” They are threatened with court martial and jail. They are told they are “worthless,” that they are “not team players,” and that “we don’t need your kind around here.”

They are stripped of rank and duties, removed from positions of command, isolated, and punished. The pressure to succumb is overwhelming. And yet, they stand strong.

Their perseverance in the face of such overwhelming adversity deserves our respect—and our support.

A military without moral leaders is a potential force of tyranny

The U.S. military is rapidly purging itself of some of the most courageous men and women in its ranks. These American patriots are taking enormous personal risk to do what they believe is right. They are the principled leaders we need in the military.

Purposefully removing people of integrity from our forces will not be without consequence. The constitutional protections for life and liberty are eroded for all of us when service members (and those who stand up for them) are forcibly and quietly stripped of these rights.

Who will be left? Who will defend our rights when these brave men and women are gone? 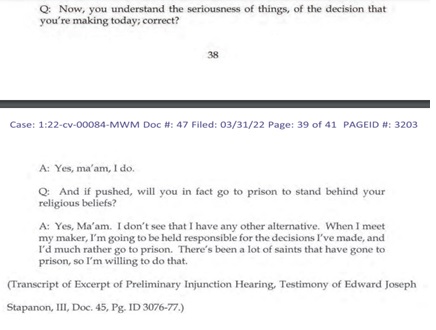 You are not alone

There are currently eight lawsuits across the country focused on fighting military vaccine mandates on religious grounds, with more being added every day:

If you would like more information on the status of these cases, or if you are a military service member looking for resources and support, reach out to the following organizations:

If you are a civilian, contact your state and federal legislators and ask them to protect the religious freedom of our men and women in uniform. If you have the means, prayerfully consider donating to Liberty Counsel help cover the cost of legal fees.