By Gualberto Garcia Jones, Esq. — Even before the Dobbs decision, state-wide referendums on abortion have always attracted massive amounts of political donations from abortionists, as well as a barrage of pro-abortion unpaid propaganda from the mainstream media. As a result, things almost always turn out badly for the pro-life side. Case in point: The recent defeat of the Value Them Both Amendment in Kansas… It’s time to shift the tide.

On Tuesday, Kansas held a popular referendum on the Value Them Both Amendment (HCR5003)—a constitutional measure that would have allowed the state legislature to regulate abortion. The result was a resounding victory for abortion advocates with close to 60% of voters rejecting the amendment. The Kansas Value Them Both vote was closely watched by political operatives at the national level because it was the first state battle over abortion after the Supreme Court returned the matter to the states.

Abortion and slavery bear many substantive similarities, but in Kansas, history provides a political analogy that is incredibly fitting.

In 1854, as the nation expanded westward, a fiercely divided Congress passed the Kansas-Nebraska Act, a law that effectively repealed the Missouri Compromise and allowed the territories of Kansas and Nebraska the right to vote to decide if they would become a free state or a slave state.

Popular sovereignty was the idea that the people would be able to resolve, through elections, the national conflict between the North and the South over the issue of slavery.

In the Dobbs v. Jackson decision, the Supreme Court adopted a similar idea to that of popular sovereignty in the antebellum period. Whereas the Kansas-Nebraska Act overturned the Missouri Compromise and returned to the new states the right to decide whether they would allow the institution of slavery, The Dobbs opinion overturned Roe v. Wade allowing states to decide how to deal with abortion.

It is time to heed the Constitution and return the issue of abortion to the people’s elected representatives. “The permissibility of abortion, and the limitations, upon it, are to be resolved like most important questions in our democracy: by citizens trying to persuade one another and then voting.” Casey, 505 U. S., at 979 (Scalia, J., concurring in judgment in part and dissenting in part). That is what the Constitution and the rule of law demand.

Attempting to resolve fundamental moral questions like slavery or the right to life by appealing to politics is not a wise decision, and Kansas may be the perfect historical cautionary tale.

For the next seven years after the passage of the Kansas-Nebraska Act, the political issue of slavery tore the state of Kansas apart. Northern anti-slavery settlers moved to Kansas to try to keep the state from becoming a slave state, while supporters of slavery poured over from Missouri to sway votes during elections. The conflict resulted in political atrocities, dozens of murders, and eventually a national civil war.

With the Value Them Both vote on abortion, Kansas has once again chosen the side of injustice in the free exercise of its popular sovereignty. But surely, just as before, the issue will not be settled after one vote. The history of slavery in Kansas teaches us that fundamental matters require fundamental solutions, and those cannot be resolved by political compromise.

Interestingly, the Value Them Both Amendment, with its vague, neutral language on abortion, would not have resolved the question of abortion or the right to life of the pre-born. All it did was nullify the Kansas Supreme Court’s unilateral decision to put its thumb on the pro-abortion side of the scale. The amendment itself would not have protected a single baby, although it would have allowed legislators to attempt to do so in the future.

Background of the Value Them Both Amendment: The Hodes case

In 2015, the Kansas legislature passed a law to restrict abortions in the second trimester. The radical pro-abortion law firm Center for Reproductive Rights sued the legislature in the state court, arguing that the Kansas bill of rights intended to guarantee the right to abortion. Then in 2019, the Kansas Supreme Court ruled that abortion was a fundamental right under the state constitution to an even broader extent than Roe v. Wade, which already protected abortion-on-demand until birth.

After the Hodes decision, Kansas for Life, one of the nation’s strongest state affiliates of the National Right to Life committee, lobbied the legislature to write an amendment to the state constitution overruling the Hodes decision.

The language of the amendment was based on Tennessee’s Amendment 1, which passed in a similar vote by a margin 4% in the Volunteer State in 2014.

To the extent permitted by the constitution of the United States, the people, through their elected state representatives and state senators, may pass laws regarding abortion, including, but not limited to, laws that account for circumstances of pregnancy resulting from rape or incest, or circumstances of necessity to save the life of the mother.

Value Them Both Amendment

Pro-life critics of the Value them Both Amendment (including the Personhood Alliance and Personhood Kansas) noted that the wording of the amendment failed to mention the right to life and put unnecessary attention on abortion in the cases of rape and medical emergencies.

Today, the divide of abortion is not a North and South divide or even a Republican vs. Democrat issue. Instead, it is much more of a rural vs. suburban divide and a religious vs. non-religious divide. The map of the results of the Value Them Both vote clearly show how the rural areas voted against considering the killing of the pre-born as a constitutional right, while the suburban and metropolitan areas, the big cities, all voted overwhelmingly to continue legalized abortion. 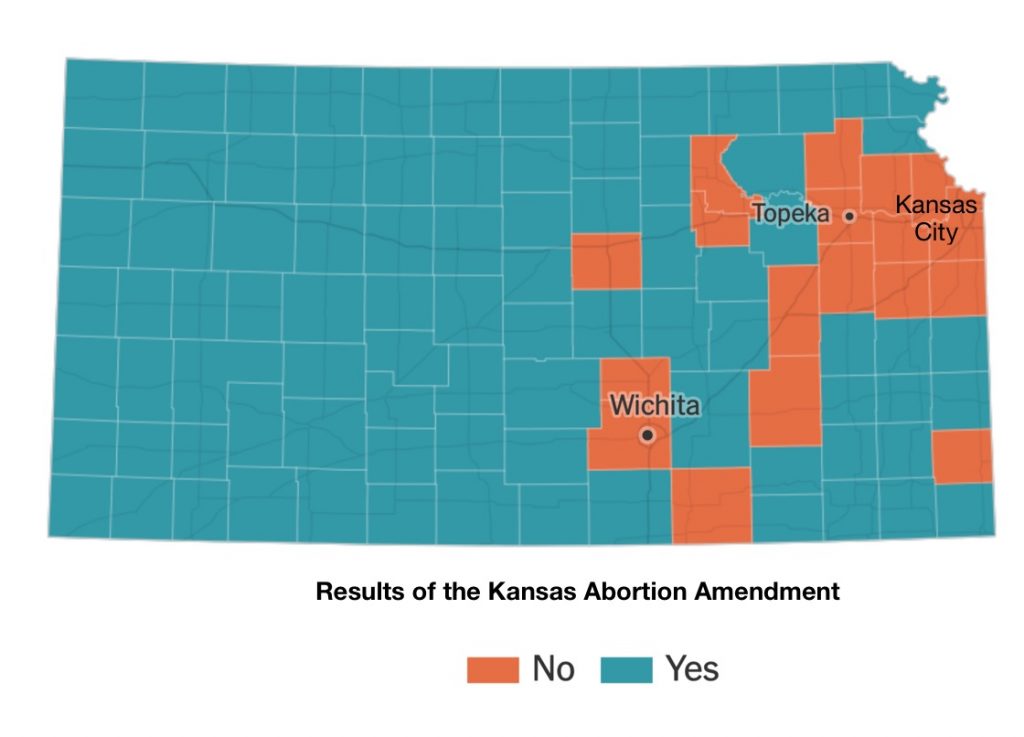 The problem with statewide pro-life referendums

Even before the Dobbs decision, state-wide referendums on abortion have always attracted massive amounts of political donations from abortionists as well as an absolute barrage of pro-abortion unpaid propaganda (earned media) from the mainstream media.

As a result, abortion referendums almost always turn out badly for the pro-life side, regardless of the language of the measure or even the state where it is being considered.

In South Dakota, abortion bans were defeated in 2006 and 2008. In Colorado, personhood amendments, which would have recognized the pre-born child as a person, were defeated three times—in 2008, 2010, and 2014. In 2020, Colorado voters even rejected a law to outlaw abortions only in the third trimester. In the conservative state of Mississippi, the Personhood Amendment was defeated in 2011. In North Dakota, the Human Life Amendment, recognizing the right to life from conception, went down in 2014.

In the case of the Value Them Both campaign, the national focus was more intense than in the others, but the basic factors determining the outcome remain surprisingly stable across all state wide votes on abortion:

The solution? Fight local battles and pull no punches

Losses like the one in Kansas should teach us that large scale campaigns in densely populated urban areas are losing battles, no matter how conservative the state supposedly is. Instead, we need to gain absolute control of state legislatures by focusing on the less glamorous, but much more winnable local legislative elections.

Because state legislatures are geographically representative, morally bankrupt urban areas can be abandoned, and resources can be poured into rural areas where Christian believers are much less likely to be impacted by the lies and distortions of abortion advocates. Win the rural areas and pro-lifers can win 75% of the state legislatures.

Pro-lifers also need to pay attention to the state judiciary. In states like Kansas, where the state bar association controls appointments to the State Supreme Court, judicial reform must be a top priority. Otherwise, state supreme courts will simply legislate their personal immoral beliefs into law.

Another important local effort every pro-lifer in rural America should be involved in is the Safe Cities movement. This effort leverages the strength and cohesion of local communities to build a real culture of life, not just in theory but in practice; activating local churches and local resources to help families and children in need.

Abortion is not a political issue

Abortion is the worst crime against humanity imaginable and therefore, it is a fundamental human rights issue. It completely dehumanizes the innocent baby in her mother’s womb and attempts to make the killing of that child a “right.” Worst of all, abortion attempts to convince parents that, to thrive, they must sacrifice their own children.

Abortion normalizes the destruction of the innocent child in the womb. It destroys the family. It drenches civil society in blood, and it nullifies the main purpose of the Constitution, which is to defend the right to life and that of our posterity.

While remaining peaceful, we must not be afraid to absolutely reject abortion and those who peddle its long train of destruction and misery. We cannot continue to consume mainstream media. Turn off your TV’s and stop subsidizing pro-abortion corporations whenever possible.

As with an enemy in battle, there can be no compromise with the peddlers of death. We must start to be pro-life without exceptions, without compromise, and without apology. Either we succeed in protecting all innocent human beings by love and by law as full persons with fundamental rights, or history will repeat itself and our nation will crumble under tyranny, anarchy, or another civil war.

If Kansas teaches us anything, it is this: A political compromise with evil only leads to greater evil.

This article was republished with the author’s permission and originally appeared here.

Gualberto Garcia Jones, Esq., is the legal counsel and former president of the Personhood Alliance and is the executive director of the International Human Rights Group. For the past 15 years, Mr. Garcia Jones has served as a legal expert on human rights issues for various organizations and campaigns in the U.S. and internationally. He is a member of the bar in the Commonwealth of Virginia, has drafted dozens of legislative proposals, and advocates for the defense of human rights before international, federal, and state governments. Mr. Garcia Jones has submitted numerous legal briefs before several courts, including the U.S. Supreme Court and the Constitutional Court of Colombia.